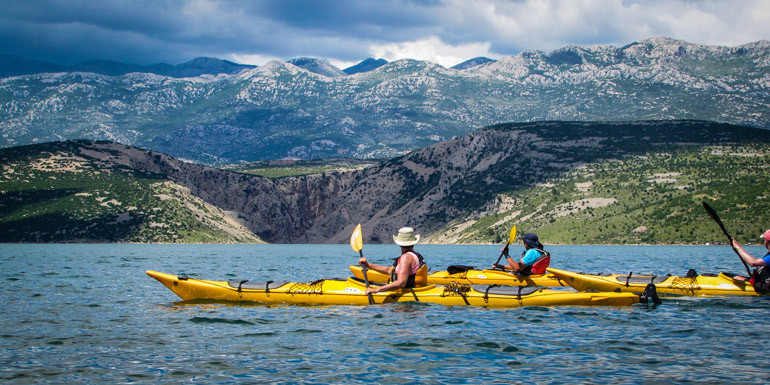 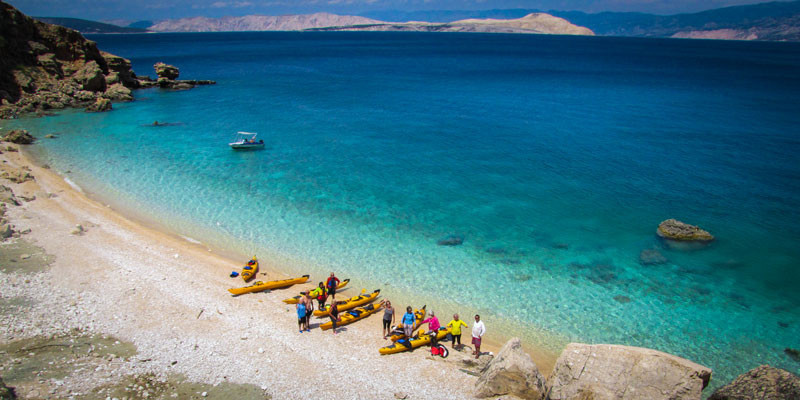 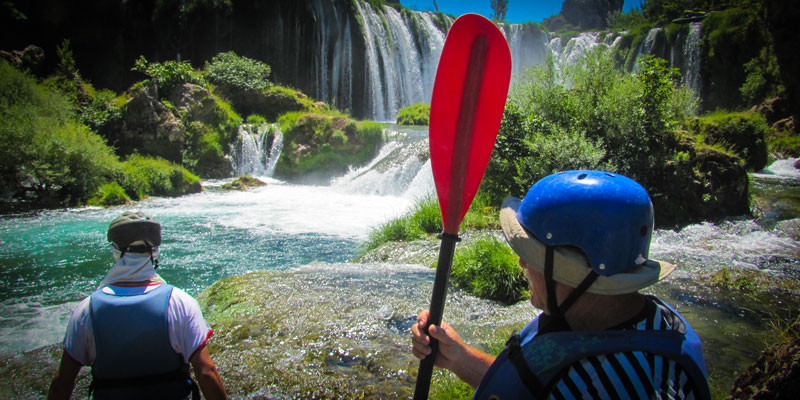 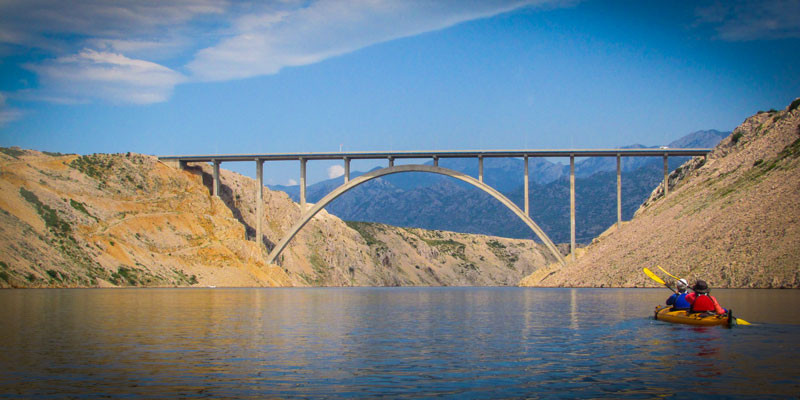 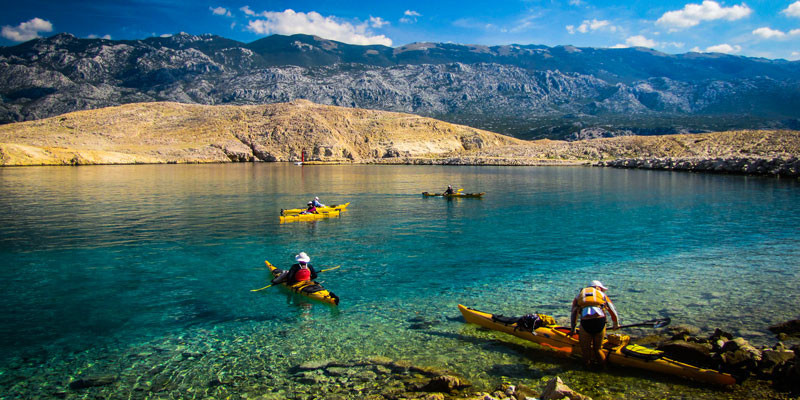 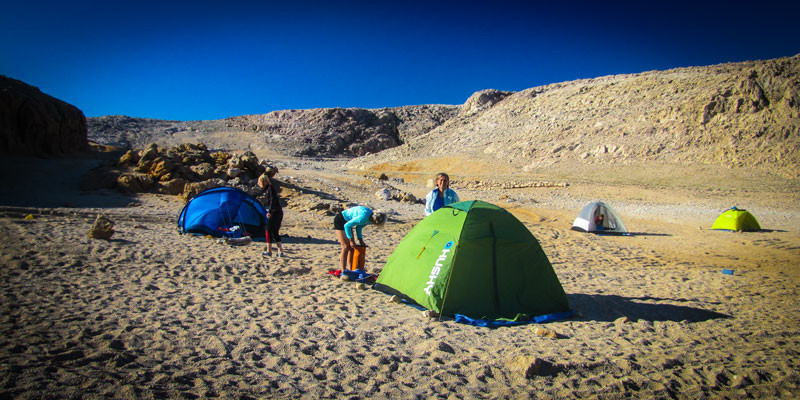 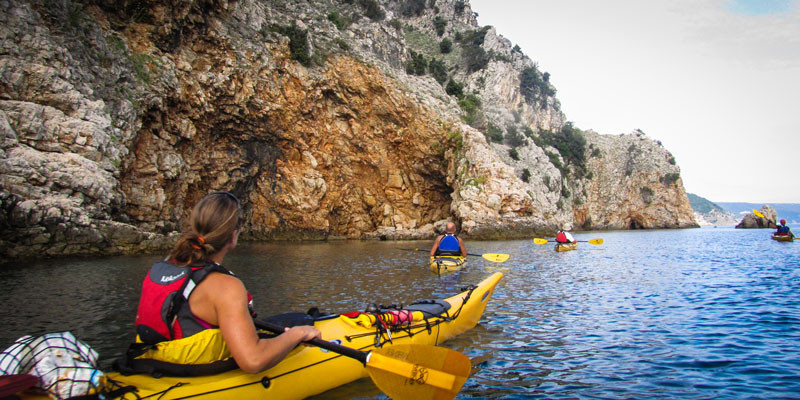 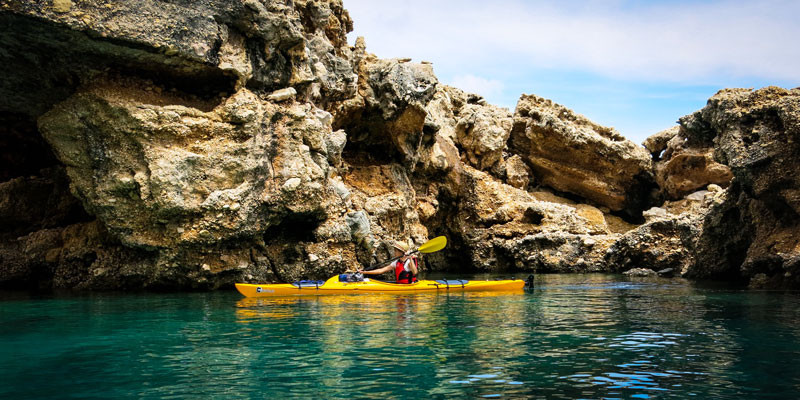 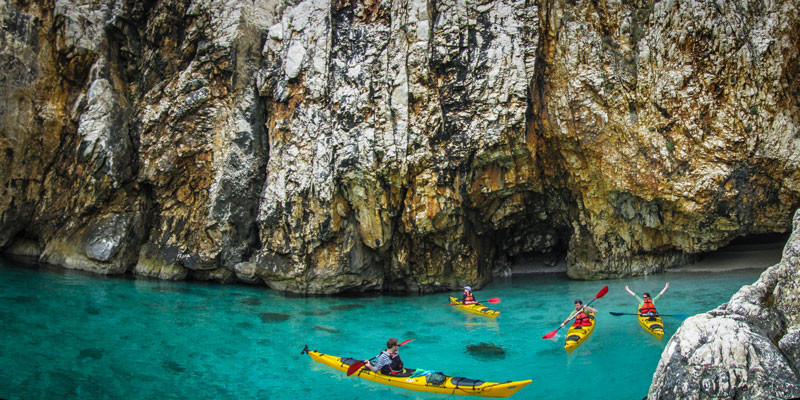 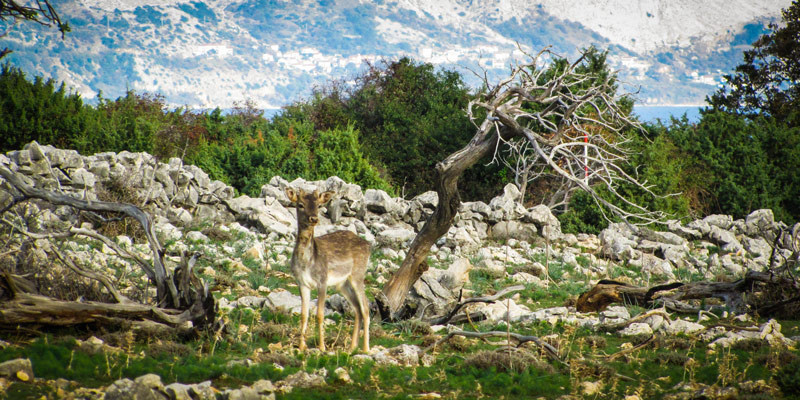 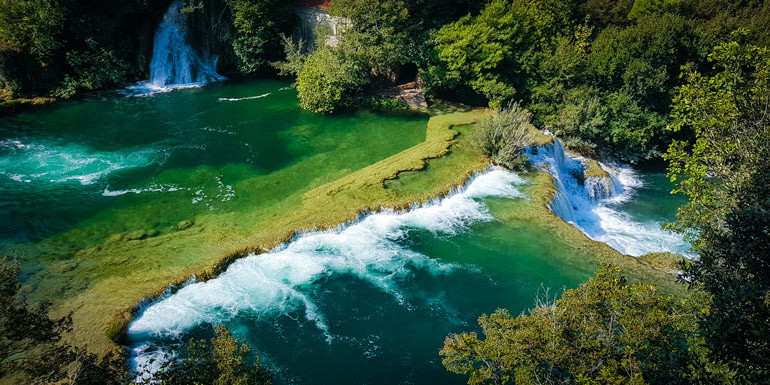 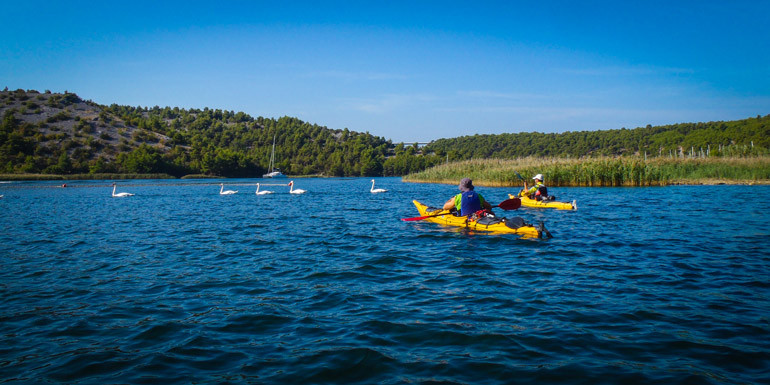 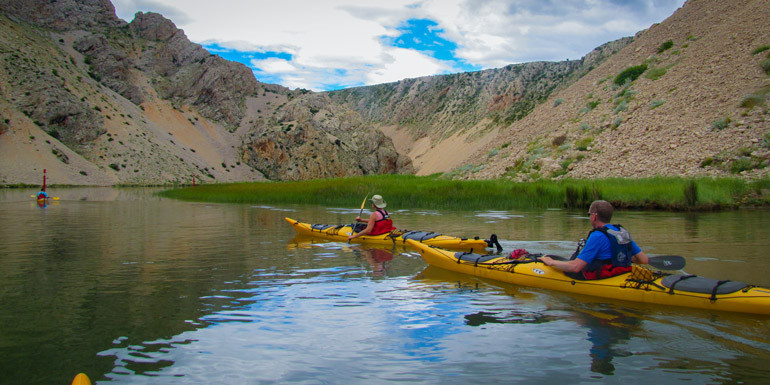 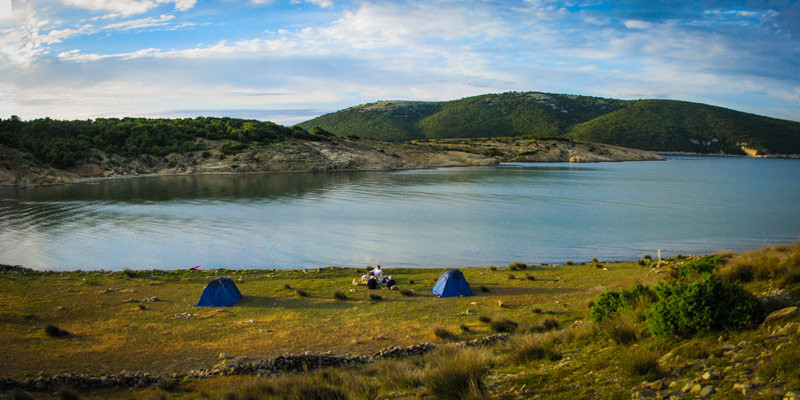 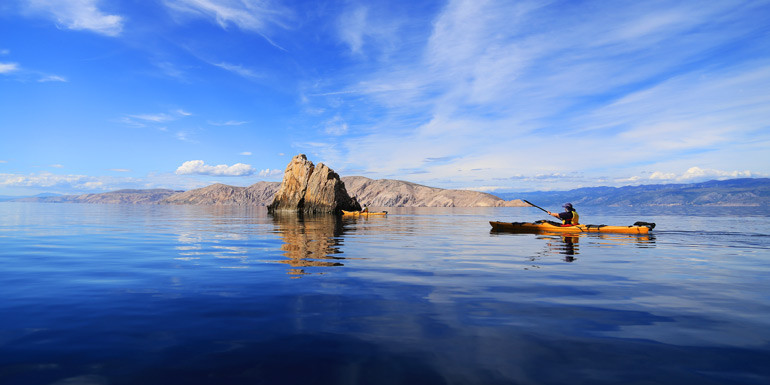 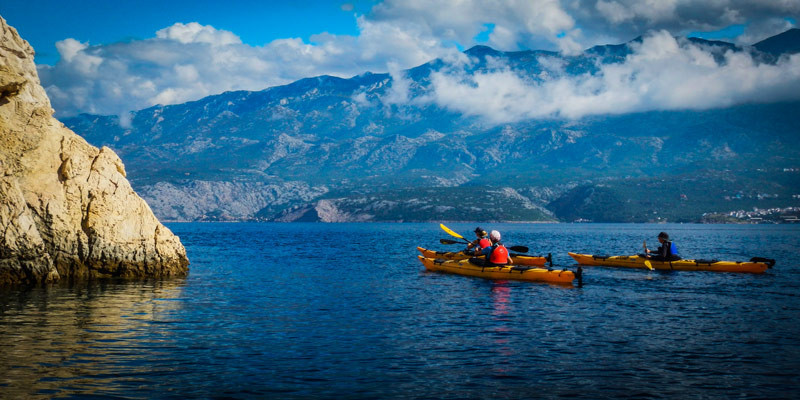 The following itinerary should be seen as an approximate guide only. Our program may change depending on the local weather conditions and preferences of the group.

Welcome to the Velebit channel or the mysterious channel of Morlach. In this expedition, we’ll explore the rugged coastline of 6 Islands laid under the mighty Mountain of Velebit and paddle under the 4 high bridges. The island of Krk with its beautiful bays and beaches and good wine or Botanical and Ornithological reserve on the Island of Prvić with its Griffon Vultures flying above the cliffs, the two former political prison Islands of St.Grgur and Goli (Naked) Island, the GeoPark of Rab and Lopar white sandy beaches, the miniature fiord of Zavratnica situated in the park of Nature with snorkeling around the sunken boat from the WWII, the moonscape Island of Pag with thrilling landscape and the Zrmanja River Canyon with its waterfalls. Well, all of this is waiting on us to be explored. The good thing about this trip is that you can choose how many days you would like to participate as it is completely logistically covered by our company. This means that you can choose a 5 or 8 days long tour or a full expedition of 11 days with a 12-day option that includes river safari and caving.

Bridge of Krk and good wine

We start our paddling day from the camp in Omišalj and paddle 2 km before we reach the bridge of Krk or former Tito’s bridge built-in 1980. The bridge length is 1430 meters long and was built in 1980 after 4 years of construction work. It will ta us 2 more kilometers before we reach our first stop at fort Maltempo built in the 16 century by Venetians due to a key position. The distance between the island of Krk and the mainland is the smallest, therefore, giving it complete control over maritime traffic. In 1875 Austrians built the lighthouse after they gained control of this peninsula. After lunch, we continue paddling to the southern point of the peninsula to reach cape Bejavec and keep following the coastline before our next stop on the beaches near one of the most famous Krk Island villages. Vrbnik is known for its wine sort Žlahtina that we will enjoy drinking at our first beach campsite nearby.

After breakfast and packing, we will continue paddling toward the south and explore the high and mighty cliffs of Kunterp ornithological reserve. Some of these cliffs are up to 200 meters high. The first stop will be in Zavratnica bay for a lunch and swim before we reach our final destination of the day, the picturesque bay of Mala Luka. Here we will have dinner under the stars.

Breakfast and paddling towards the town of Baška and its southern point from where we’ll cross Senjska Vrata (doors of Senj) to reach the Island of Prvić. This is the largest Croatian unhabituated Island and in 1972 it was proclaimed to be the botanical and ornithological reserve. Here, on the cliffs, is the nesting place of Griffon Vultures. The biggest Eurasian bird with a wingspan up to 2.9 meters. We’ll make a lunch break on the only beach that the east side has to offer before we continue circulating this Island to its west coast and reach our final beach for the overnight and dinner.

Breakfast on the beach and paddling to 3.3 Km distanced Island of Sveti Grgur (St.Gregory). This Island was a former political prison and we might find some time to visit its remaining before we paddle its rugged east coast with high cliffs. Then we’ll cross to another former political prison Island of Goli Otok (naked Island) that we will circumnavigate and visit. We paddle back towards Grgur Island and then we’ll cross to the Island of Rab and camp on a white sandy beach of Sahara Bay where we’ll serve the dinner.

Today we’ll paddle towards the GeoPark Rab and Medova Buža Cave where we’ll have a chance to jump in this gorgeous cave from its hole in the ceiling. We will also stop at two places for a swim and slip in a few more caves. Our camping spot will be in the Bay of Mag with its red gravel sand that looks like planet Mars. For those who choose the 5-day option, the trip ends in the bay of Mišnjak ferry port from where you’ll have organized transfer to Rab.

Breakfast and crossing to the mainland following the coastline to reach the miniature fiord of Zavratnica situated in the Park of Nature Velebit. We’ll swim in this fresh sea filled with underground spring water and dive around the shipwreck from the second WW. We’ll continue to follow the coastline and have a lunch stop before we cross to the Moonscape Island of Pag and camp under the remains of late antique hillfort.

Breakfast and paddling along the Moonscape Island, passing by the ferry port, and making the first stop on our 12th kilometer for a lunch break and swim. Then we paddle 8 more k’s for another swim stop before we reach our amazing campsite on one of the few beaches in the Bay of Pag.

We’ll explore the Bay of Pag with its amazing scenery and even more amazing swim stops before we stop in the Town of Pag and finish our second part of the expedition for those who choose the 8-day trip option. Here we’ll collect your kayaks and gear while the rest of the group will continue paddling the Channel of Velebit and Pag coastline. We’ll stop in a small bay for overnight and dinner on the beach.

DAY 9. Bridge of Pag and Fortica

Our paddling destination for today is 30 km distance Town of Ražanac but before we reach our campsite we'll finish the east coast of this Moonscape Island and paddle under the bridge of Pag with a view on the ruins of Fortica built in the 17th century to monitor the sea on what used to be very busy route vulnerable to pirate attacks.

From Ražanac we’ll paddle to the Town of Vinjerac formed in the early Middle Ages but it was a place of fierce battles between Venice and the Turkish Empire as it was one of the control points between Turkish-held Lika and Venetian Zadar. The battles were so fierce that Venice destroyed Vinjerac in 1570 so it does not fall into Turkish hands. Our next paddling is under the two bridges connecting Velebit with Zadar backlands but also here is the end of the Velebit channel. The second bridge we paddle under was built in 2005 on a site of a similar bridge that was destroyed in 1991, during the Croatian War of Independence whilst the first bridge on our way was built in 1997. We will reach the Sea of Novigrad and camp near the town of Maslenica.

Today we’ll paddle the Zrmanja River Canyon and its brackish waters. Our first stop will be in the town of Obrovac from where we'll continue upstream to the small, 3 m. high, a waterfall of Jankovića Buk where the river touches the sea. Here are the remains of the old mills where we can go out for a swim. We’ll then paddle back to Obrovac to finish our Sea kayaking expedition and have a transfer to the town of Rovanjska for our final dinner. We’ll then make a transfer to Zadar for those who want to finish the tour or organize the overnight (included in the price of the 12-day tour) for those who choose the optional day (day 12) with some great adventures ahead.

It would be a shame to be here and not to visit the upper stream of river Zrmanja, known as Tedanius to the ancient Romans. We will have a 3-hour river safari through this snake shape river with its crystal clear water and magnificent waterfalls. After lunch on the river banks, we will have a short transfer to Rovanjska for a caving adventure in Modrič cave with a local guide. You will get overall suits and helmets with the light as the cave is completely natural but rich with stalactites and stalagmites, pillars, and mythological creatures.

The 5-day trip option includes 4 overnights, all meals, starting with lunch on day one to lunch on day 5, sea kayak, life vest, light paddle, 20-liter dry bag, and transfer to the town of Rab.

The 8-day trip option includes 7 overnights, all meals, starting with lunch on day one to lunch on day 8, sea kayak, life vest, light paddle, 20-liter dry bag, and transfer back to the Island of Rab / or optional to the town of Zadar(+ 40€ per person).

The 11-day trip option includes 10 overnights, all meals, starting with lunch on day one to dinner on day 11, sea kayak, life vest, light paddle, 20-liter dry bag, and transfer to Rab or Zadar.